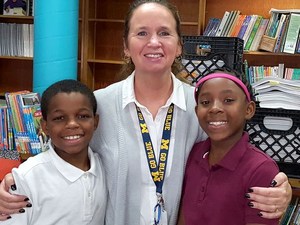 September 30, 2016
Two students from Freeman Elementary School in Flint are expected to be part of an event with first lady Michelle Obama at the White House next week.

WASHINGTON – Two students from Freeman Elementary School in Flint are expected to be part of an event with first lady Michelle Obama at the White House next week.

Xavier Purches, a 10-year-old fifth-grader, and A’Layia Samon Howard, a 10-year-old fourth-grader, have been invited to take part in the fall harvest at the White House Kitchen Garden, along with 20 other students from across the U.S. who are part of the first lady’s Let’s Move! Initiative to reduce childhood obesity.

The event is set for 3 p.m. Thursday, Oct. 6, at the White House and will include Sesame Street characters and actors, Al Roker of the "Today" show, retired NBA All-Star Alonzo Mourning, chef Jose Andres and others.

So far, more than 4,800 salad bars have been opened at schools across the country through the program – including at Freeman Elementary and 18 other schools in Flint, which has been the site of a public health crisis due to high levels of lead in the drinking water. Good nutrition, including eating more fresh fruits and vegetables, can help mitigate the damage caused by lead exposure.

At the White House event, Xavier and A’Layia will help White House chefs prepare fruits and vegetables and eat them.

According to self-written biographies provided by the United Fresh Start Association, Xavier is “one of the coolest fifth-graders” at Freeman Elementary and loves drawing, reading, watching movies and playing football. He hopes to be a football player or an author of graphic novels someday.

A’Layia’s favorite color is blue, she's had perfect school attendance since kindergarten and one day wants to be president of the United States.

“This is my first time on a plane and I’m nervous, but I can’t wait to get to Washington, D.C.,” she wrote. “I am so proud of this moment. I’ve never traveled anywhere before. This moment I will always have in my heart.”