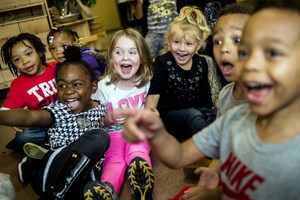 FLINT, MI -- More than 200 children will receive free early childhood education this year through a former Flint elementary school that has been re-purposed and reopened as part of an effort to combat the effects of lead caused by the city's water crisis.

The Flint school district closed the school in 2008, reopened it in 2011 and then closed it again in 2015 due to budget cuts.

Its programs provide exploration, learning and creative play opportunities, which can help mitigate the effects of lead exposure.

"Not only will this program strive to balance the scale for children during those critical first five years of their lives it will strengthen the overall educational landscape in the city of Flint," said Bilal Tawwab, superintended of Flint Community Schools, at a ribbon-cutting ceremony held at the school on Thursday, Nov. 3.

Flint Community Schools, the University of Michigan-Flint and the Genesee Intermediate School District will oversee operations at the center, using the same methods as top-ranked facilities in the state.

"Great Expectations offers the same evidence based teaching methods as those currently used at the University of Michigan-Flint's early childhood development center, which is nationally accredited and is among the top-ranked facilities in the state," Tawwab said.

Most important to Calley was that so many people and organizations were able to figure out ways to break down the barriers for Flint families - to create a program, for the sake of the children, that gives them access to one of the wraparound services known to combat the effects of lead exposure.

Lead has become a major health concern in the city after high lead levels were found in children following a water switch that damaged pipes across the city. High lead in children can affect learning and cause behavioral problems.

"For those who had to do things differently -- for adults to deal with the silos and the separation and the funding streams and all the things that that are in the way of wraparound services and to get rid of the boundaries of the territories and put these kids at the center of it, it gives me new hope of what's possible," Calley said. "That what's happening in Flint here today and things that are starting this momentum that's building in this community it gives me so much confidence that the best is yet to come. There is a bright future for flint and the people in Flint. And they came together because they put the kids first."

In that blend of funding, the state of Michigan is providing $2.2 million this year to cover the costs of student attendance, according to a news release. The Charles Stewart Mott Foundation and the Pritzker Children's Initiative made grants of $1 million and $500,000, respectively, to renovate the Cummings Community School building to accommodate the needs of younger children. Other donors included:

"The genesis for this school is to develop a way to help our children, and our community, combat the effects of lead exposure, he said. "In the end, our ultimate goal is to lift all the family out of poverty, not just the children."

It will also serve as a community center where parents can earn their GED or high school diploma, Barnett said.

Kildee said that the school will provide stability and certainty for the families who attend it.

"One of the aspects of this crisis that's most difficult is the uncertainty that it has created in our community - uncertainty about the extent of the harm that has been done, uncertainty about the impact that it might have, long term, uncertainty as to which children and to what degree they might be affected by exposure to high levels of lead - those are things we don't know. But what we do know, what we can be certain about, is that the kids who come here, the kids who participate in early childhood education will do better," Kildee said.

While there are still spots available for the 4-year-old program at the center, there is a combined waitlist of about 200 children for other programs.