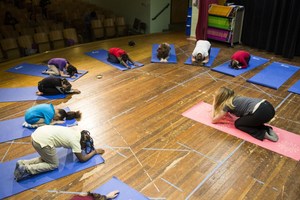 November 7, 2016
Mindfulness trainers from across the country will visit Flint Tuesday, Nov. 8, in an effort to help the city's students control the behavioral effects of lead exposure.

FLINT, MI -- Mindfulness trainers from across the country will visit Flint Tuesday, Nov. 8, in an effort to help the city's students control the behavioral effects of lead exposure.

Teachers at Flint Community Schools will receive mindfulness training from two CEOs and a co-founder of three national organizations on Tuesday while students are off for Election Day.

Mindfulness is the practice of paying attention to the present moment, intentionally and without judgement. It is not associated with any religion or belief system, according to Christina Ferris, development director for the Crim Fitness Foundation, which coordinates the training.

Teachers will then use their training to help students in their classroom focus, deal with problems more effectively, and make choices on how to respond to difficult situations instead of just reacting, Ferris said.

"With the water crisis hitting and more kids affected by lead exposure - lead exposure affects the prefrontal cortex of the brain, and that's the part that controls reasoning," she said. "So that means more behavioral issues and ADHD. Mindfulness training gives them the ability to focus and concentrate, and it actually helps mitigate some of the effects of the lead."

Schools in other communities that started using mindfulness training saw fewer referrals to the principal's office and fewer expulsions, according to Ferris.

"Kids learn how to deal with peers and respond and react to stressful situations better," she said.

The Crim's team of programming partners include: